A prominent Saudi journalist known as a fierce critic of his country’s policies has vanished after visiting a Saudi consulate in Turkey.

Jamal Khashoggi entered the consulate in Istanbul on Tuesday afternoon. He went to complete “routine paperwork”, the Washington Post said, and has not been heard from since.

“We don’t know if he is being detained, questioned or when he will be released,” the newspaper said.

In the absence of any reliable information about his disappearance, a notification on Khashoggi’s website now declares: “Jamal has been arrested!”

Reuters news agency quoted two anonymous Turkish officials as saying that he was still inside the consulate building. Qatar-based news outlet Al-Jazeera, meanwhile, reported that Turkish police have begun a search for the missing writer.

Saudi Arabia has yet to issue an official statement.

Khashoggi has been living in self-imposed exile in the United States, and is an established critic of the Saudi government – particularly the reform plans championed by Crown Prince Mohammed Bin Salman. 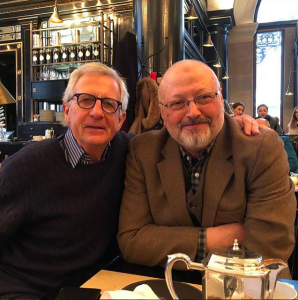 Guardian: The crown prince doesn’t listen to Saudis – why would he listen to Theresa May?

The Queen Has Never Worn a Face Mask—and...

Why the Queen is breathing a sigh of...

‘Grace: Her Lives, Her Loves’ featured in Arab...